Winter is coming! Cooler months and wet and rainy days mean that little ones need a bit more inspiration to have fun. Here are just three of our favourite activities to enjoy during the cooler months.

Sporting some of the cutest fashions and striking some high fashion poses, these little tykes have some great style! Here are some of our most recent faves!

@kidsfashionblogger
Adorable and ever the perfect models, these two little ones definitely have fashion and style in droves!

@ministylehacker
Our friends in the US truly have style and fashion worked out. @ministylehacker can also give you some great tips about getting the Hollywood look for less.

@3minimodels
This trio sets the bar high on the style-o-meter with some great looks, awesome poses and striking eyes that catch you with every photo.

@mito30u
Our Japanese mates offer us a totally awesome style that can't be beat! This little one is ready for her close up! 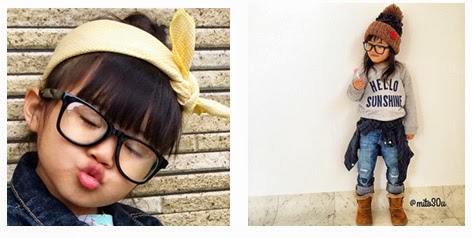 Thanks to all the fantastic little models for sharing their super styles with us! If you think you've got an awesome style, send us a pic at info@idtee.com.au.

As many new parents would attest, naming your child can be a nail biting experience. The name you give your child is what makes them unique and will help them discover their place in the big new world.

So for soon- to-be-parents looking for some inspiration, or those wondering how their name choice faired among others, we've highlighted some of BabyCentre's the top baby names and trends in Australia for 2014.

For girls, the ever popular Ava has moved up to take the top spot in 2014, bumping Charlotte down to third position. Making their grand appearance into the top ten baby names are Mia and Ella, while Zoe and Sophia have dropped out of the top ten all together.

Names including V are definitely on trend with Ivy, Evie, Olivia, Evelyn and Violet all entering the top 50 with ease last year.

For boys, Oliver remains the number one favourite with Noah in second place and Jack a long time favourite in third. Mason and Henry are new comers to the top ten list of popular boys names and are rumoured to have jumped up the list thanks to baby Kardashian born in 2009 and Khloe Kardashian's toy giraffe collection - every giraffe is named Henry!

Thomas and Liam made an appearance in the top ten list of most popular boys names in 2014, with Lachlan, Charlie, Cooper and Ethan falling back to positions 13, 14,15 and 16 respectively.

Games of Thrones addicts and admirers of the independent and headstrong, Ayra Stark, will be pleased to know that Aria (spelt in a number of different ways) has hit the top 50 list for the first time in 20th position.

Matilda and Charlie are also new entrants into the top 50. After taking a year off in 2013, these names are making their way back into popularity.

Girls names with an N or ER at the end are increasingly making an appearance, moving away from the traditional girls' names that end with a an A or E sound.

Family names as first names remain a popular trend for boys, while boy names starting with H are also on trend.

Hudson, Henry, Hunter and Harrison all moved up the list in 2014, while Mason, Luca, Sebastian and Archer were among the biggest movers and shakers in 2014 and climbing the ladder.

If you're a celebrity tracker and want to know what the glitterati are naming their babes, then check out some of these celebrity baby names that made an impact in 2014. 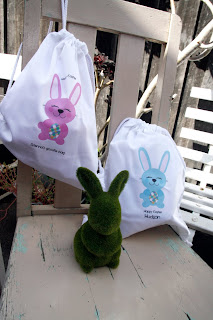 It's been a while between blogs, my apoligies!
We have just added some cute Bunny designs to our range for Easter and to celebrate we have a speicial promotion. When you spend $50.00 online (excludes freight) from the 19th March until 2nd April 2012 or until stock runs out...we will be giving away one of these extra cute Personalised Bunny Mini Tote Bags for FREE. Valid one per customer per transaction. Choose from our Blue or Pink Bunny design and state name and colour choice in checkout (other comments section) These are also available to Purchase for $14.50 each. Stocks are limited as they are all handmade here in Melbourne.
Posted by Idtee at 10:12 PM No comments:

We have been busy bees testing new products which will be launching soon!

We are so excited to be able to offer D.I.Y (Do It Yourself) iron on personalised IdTee designs for Kinder, school bags & lunch boxes. Its super easy and only takes one minute to iron on and the results are amazing!

Above is an example I made tonight. I purchased a canvas lunch box from Smiggle for $12.95 and then ironed on these two new personalised IdTee uber cool new designs.

Most of our designs will be available to Purchase as a D.I.Y heavy duty commercial grade transfers in the very near future.

Watch this space as we will be having a great special when we launch this new product!

There will be two sizes available!

with an easy instruction sheet included in every order!

Looking forward to getting this new product up online and available to purchase! 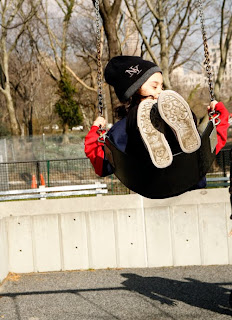 Just Back from an amazing trip to the USA. I love this care free swing shot of my youngest in Central park. Looking forward to swinging back into work mode, full of new ideas and inspiration. Many many thanks to Amanda for processing orders and running the business whilst I was away I couldnt have gone without you!
Posted by Idtee at 1:41 PM No comments:

Labels: and thanks for Help, New inspriation, NYC 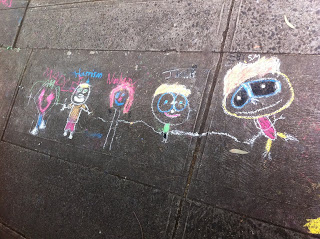 It's been a long time between blogs I know however I must admit I am finding that the use of Facebook has taken over! Yesterday was Harmony Day and to celebrate the kids all spoke about what harmony means to them at school...one of the responses was by a 5 year old prep Student.

Its like...friendship and everyone gets along!

I thought how appropriate!
Wouldn't it be nice if just everyone could get along how perfect could life be???
Posted by Idtee at 2:11 PM No comments: